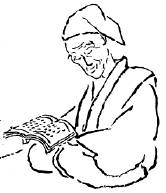 Although we focus on Ryokan’s poetry in this lesson, it is important to know that this 18th cent rut hermit-monk represents for the Japanese something special in the Japanese character. D.T. Suzuki went so far as to say that “When we know one Ryokan, we know hundreds of thousands of Ryokan in Japanese hearts.”

Ryokan also exemplifies the Zen Buddhist idea of attaining enlightenment and then returning to the world with “a serene face and gentle words.” In his life he was indeed Daigu, the “Great Fool” (the literary name he gave himself), one who had gone beyond the limitations of all artificial, man-made restraints.

What will remain as my legacy?
Flowers in the spring,
The hototogisu in summer,
And the crimson leaves of autumn.

As with so many of the life stories of Zen masters, Ryokan’s childhood was marked by what seems to have been an inner, spiritual crisis.Once a fun-loving young man, he became withdrawn and finallydecided to become a Buddhist monk. Ryokan studied with Kokusen

at Entsct-ji for almost twelve years, studying Chinese poetry (waka), linked verse (renga) and calligraphy, becoming skilled in all of them.

Ryokan then looked for a hermitage and found an empty hut half way up Mount Kugami. He named it Gogo-an. Gogo is
half a sho, the amount of rice necessary to sustain a man for one day; an is
hermitage. It is here that the stories and anecdotes of Ryokan’s life originate.

My hut lies in the middle of a dense forest;
Every year the green ivy grows longer.
No news of the affairs of men,
Only the occasional song of a woodcutter.
The sun shines and I mend my robe;
When the moon comes out I read Buddhist poems.
I have nothing to report, my friends.
If you want to find the meaning, stop chasing after
so many things.

While his hut was deep in the mountains, Ryokan visited the neighboring villages to play with the children, drink saki with the farmers, or visit his friends. He slept when he wanted to, drank freely, and frequently joined the dancing parties held in summer. He acquired his simple needs by mendicancy, and if he had anything extra he gave it away. He never preached or exhorted, but his life radiated purity and joy; he was a living sermon.

He respected everyone and bowed whenever he met anyone who labored, especially farmers. If anyone asked him to play the board game go or recite some of his poems, he would always comply. He was continually smiling, and everyone he visited felt as if “spring had come on a dark winter’s day.”

First days of spring – blue sky, bright sun.
Everything is gradually becoming fresh and green.
Carrying my bowl, I walk slowly to the village.
The children, surprised to see me,
Joyfully crowd about, bringing
My begging trip to an end at the temple gate.
I place my bowl on top of a white rock and
Hang my sack from the branch of a tree.
Here we play with the wild grasses and throw a ball.
For a time, I play catch while the children sing;
Then it is my turn.
Playing like this, here and there, I have forgotten the time.
Passers-by point and laugh at me, asking,
“What is the reason for such foolishness?”
No answer I give, only a deep bow;
Even if I replied, they would not understand.
Look around! There is nothing but this.

His love for children and flowers
is proverbial among the Japanese. Often he spent the entire day
playing with the children or picking flowers, completely forgetting
his begging for that day.

Fresh morning snow in front of the shrine,
The trees! Are they white with peach blossoms
Or white with snow?
The children and I joyfully throw snowballs 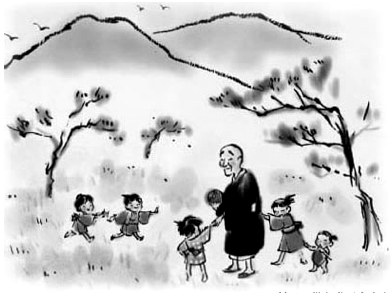 Ryokan’s life reflects the tradition of radical Zen poets or “great
fools” including the Chinese Layman Pang and Hanshan  and the Japan’s poets Ikkyu and Hakuin). Ryokan had no disciples, ran no temple, and in the eyes of the world was a penniless monk who spent his life in the snow country of Mt. Kugami. He admired most the Soto Zen teachings of Dogen Zenji and the unconventional life and poetry of Zen mountain poet Hanshan. He repeatedly refused to be honored or confined as a “professional” either as a Buddhist priest or a poet.

Years of intense Soto Zen training had made Ryokan more open and kind, not austere or remote. Ryokan’s life at Gogo-an represents that highest stage of Zen spirituality; he “returned to the marketplace with bliss-bestowing hands,” the state depicted in the last of the well-known Zen series of the ten ox-herding pictures and the culmination of all Buddhist practice.